CNC Auto Lathes are computer-controlled machine tools that are used to fabricate a variety of metal parts, including shafts, gears, screws, and bolts. CNC stands for Computer Numerical Control, and these lathes use numerical data to control the position of the cutting tool and the speed of the spindle. CNC Auto Lathes can be programmed to produce a variety of different parts, and they are often used in high-volume production environments.

They can also be used to create complex shapes such as spirals and helixes. CNC Auto Lathes are often used in high-volume production environments because they can produce large quantities of parts quickly and accurately. CNC Auto Lathes are also used in prototyping and small-scale production environments because they can create parts with very tight tolerances.

A Short History of Auto Lathes

A Lathe is a machine that bores circular holes and/or depressions into solid objects (metal, wood, brass, copper, nylon, steel, stainless steel, titanium, and even some plastics) enabling the craftsman to create any sort of cylindrical object. 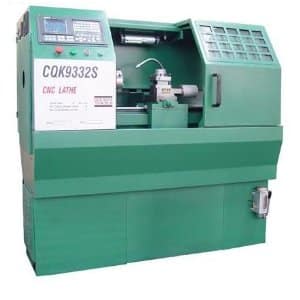 One cannot give a history of the Auto Lathe without touching on the history of the lathe itself.  Actually, it would be patently impossible to give a short history of the lathe since lathes (albeit hand-powered, two-person lathes) were known to exist as far back in time as ancient Egypt.  The best estimates put the first appearance of lathes at 1300 BC.  The Romans improved on the model (adding what was known as a turning bow) and the craftsmen of the Middle Ages went a step further and added a pedal that allowed one person to operate the lathe.

Perhaps the most useful kind of lathes is CNC Auto Lathes.  A CNC Lathe Machine is an auto lathe that is controlled by computer. CNC lathes are quickly replacing older types of lathes, such as metal lathes or multi-spindle lathes.  The primary reason for their popularity is that not only are they are easier to use than the older types, the computer technology used to run them results in more precise parts; drilled, bored, recessed, threaded, it doesn’t matter.  A CNC Lathes will produce any type (or combination of types) with exacting accuracy.

The reason that CNC Lathe Machines can produce this sort of precision work is because they have tool paths that are programmed into the lathes software.  These tool paths are created with computer assisted design technology, enabling piece after identical piece of precision parts to be produced one after the other with absolutely no deviation from the original.

While CNC Auto Lathes are quickly replacing the older and less accurate models, even newer types are emerging.  Swiss styled turning, for example, is becoming so precise that it is accurate to several ten thousands of an inch.

CNC Auto Lathes can come in a variety of sizes and prices to serve everyone from industrial machinists to hobby enthusiasts.  From table-sized CNC lathes, such as the Delta Industrial 46-455 12-1/2-Inch 5-Speed Midi Lathe at $449, to the stand-alone Bolton 12 3/5″ X 30″ CNC Lathe (with a price tag of over $9,000) there is definitely a CNC auto lathe for everyone, no matter what their project or budget.