CNC milling machines can make the difference between slipshod craftsmanship and precision work.  This automated method enables interchangeable machine parts to be made to exacting specifications.

Used to machine solid materials, these automated machines (as a class of tool separate from lathes which run rotary files) have been around since 1814. As technology has improved, so has the quality of the parts produced by the CNC machines of today. These machines enable craftsmen to produce multiple pieces with the identical specifications. This allows for greatly increases the quality and reliability of the products produced.

A Short History of Milling Machines

The origins of the milling machine are rather hazy; though it is known that they evolved from the old practice of rotary filing (where a circular cutter equipped with file-type teeth is attached to the headstock of a lathe).  Many of the original developments and early advances in milling machinery were made by individual craftsmen in their own stores, and were not freely shared with other shops, but a brief sketch follows.

The first milling machinery (separate from lathes which run rotary files) made their appearance about 1814 and the original invention was initially credited to Eli Whitney, it is thought that inventors like Robert Johnson, John H. Hall,  Simeon North and Thomas Blanchard may have had just as much to do with the fine-tuning of workable milling machines as Eli Whitney.

While a number of individual contractors adopted the use of these machines, it was the U.S. Federal armories in Springfield and Harpers Ferry that began using them in earnest.  By 1830, James Nasmyth had built an advanced milling machine that was tooled to be able to mill a six-sided hex nut, which in turn was mounted in a six-way indexing fixture, and from there the advances to milling machines began to come thick and fast.

By WWI technology had advanced considerably.  Specifically the idea of coordinate dimensioning had laid the foundation for what is known today as CNC technology.

Computer technology has allowed these machines to advance in ways that one hundred years ago would have been unimaginable.

Most of these machines are vertical mills that are controlled by computer; allowing the spindle to move vertically on the Z-axis, a flexibility that enables users to use these new machines in operations as delicate as engraving, relief sculptures and die sinking.  But CNC technology are not restricted to vertical mills, they can exist in most any type of manual machinery such as horizontal mills or multi-axis machines. 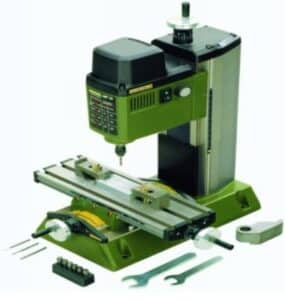 Today’s CNC milling machines can come not only in vertical or horizontal styles, but in sizes that range from industrial sized machines, like the Grizzly G0618 that has a 12-position ATC (and costs over $44,000) to table-top models for the hobby enthusiast that cost, like the such as the Proxxon 37110 Micro Mill MF 70, only a little over $360, ensuring that no matter what type or volume of work you are looking to produce, there is a quality CNC machine to meet your needs and budget.

We are a participant in the Amazon Services LLC Associates Program, an affiliate advertising program designed to provide a means for us to earn advertising fees by linking to Amazon.com and affiliated websites.